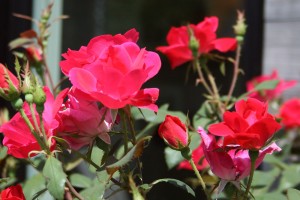 This past Sunday, I was fortunate to be included on the guest list at Boneyard Studios’ monthly open house — a tiny house community nestled in a triangle of land bounded by alleys in Washington, D.C. Across one of the alleys is a large old cemetery, hence the name.

The community is made up of three tiny houses and a workshop/shed outbuilding. There is also a highly productive garden, hot tub, patio with a wood-fired oven and open green space for company. There was lots of company at this week’s open house.

Despite its loveliness,the mindfulness of the design and use of what would otherwise be remnant space, there is a lot of push back across the country on urban infill in this form. 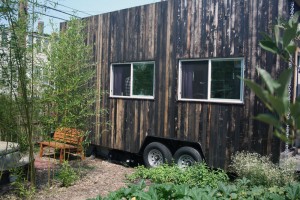 Each of the three houses is distinctly different in style, as I expect are the owners, but as a community they represent common values of the three friends who built them. The core of those values is to leave as small an impact on the environment as possible while still having access to the vibrancy of an urban setting.

The Matchbox is most striking for its exterior finish — shou sugi ban — which is an ancient Japanese exterior siding technique that preserves wood by charring it. According to Jay, the owner of The Matchbox, the finish not only protects the outside of the house, it also has great aesthetic appeal which is another reason for choosing it. 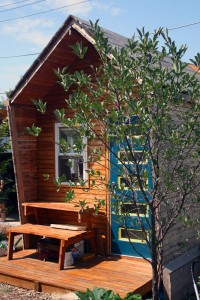 Charming and still under development but soon to be finished, is Pera House which is actually a rebuild. The owner of Pera House, Lee, bought an already existing tiny house on an 18-foot trailer.

Once she went to collect her tiny home freshly acquired from Craigslist, she learned that the original builder had used only 16 of the 18 feet available on the trailer. The loss of two feet makes quite a difference at this scale. Instead of remodeling, she tore it down and started over.

Like The Matchbox, Pera House uses a loft bed accessed by a ladder in its interior design. Innovative space-saving design techniques such as sleeping lofts, wet bathrooms, and ceiling storage drive the tiny house credo. 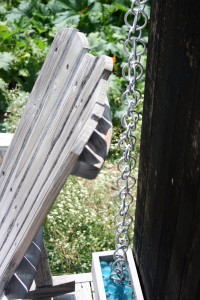 Water catchment system on The Matchbox

The Matchbox uses rain chains that disappear into a trough filled with what looks like vibrant blue sea glass instead of downspouts. 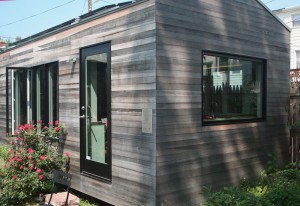 Along with that high bar for style and design, comes a high price tag. Minim House cost upwards of $55,000 to build, much more expensive than The Matchbox or Pero House. But in the scheme of housing prices in DC generally, $55,000 qualifies as affordable.

Unfortunately, tiny houses cannot be financed. Affordability is a relative notion if you have to shell out the cash.

On the tour, Brian, the owner of Minim House, explained that much of the innovative, small-space design choices were adapted from the boating industry which has been designing for small space since the Phoenicians. Minim House puts those design choices on wheels.

Here is a great video tour of the interior of Minim House.

As it should be for any respectable eco-friendly community, the entrance to Boneyard Studios is through the garden gate. 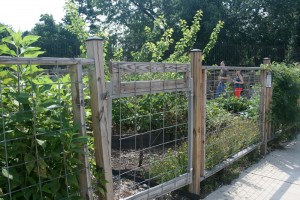 The garden reaches into the most narrow point of the triangle at the southern tip of the lot and uses raised beds surrounded by wood chip pathways and stuffed with both edible and ornamental plants. There are flowers, fruit, herbs, greens and, of course, vegetables. 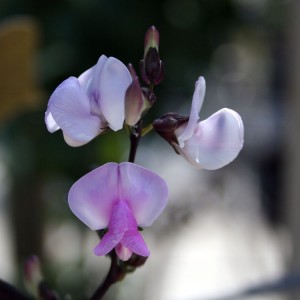 The eastern lot boundary is lined with fruit trees. I noticed apples and figs, as well as perennial vegetables like rhubarb and flowers.

I wonder, though, how apples can be grown successfully without spraying. I know that pears can. Organic gardening is a concept that I naturally equate with the tiny house movement given the emphasis on low impact on the environment.

The garden reflects as much thought and care as the houses do. It shows hours of work. It is well tended, well labelled and highly productive with an array of easy to grow plants that have been carefully selected. 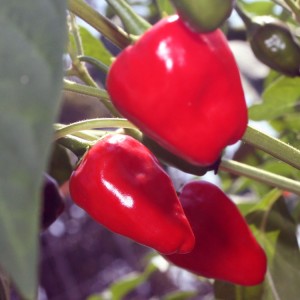 The entire lot is picturesque. The garden has found objects like old water pumps strategically placed throughout the plots to give the tight space depth and character.

The land, as small as it is, is laid out for the greatest visual effect. There were no visible compost piles, tools or accoutrements that tend to amass in working gardens.

Perhaps they’d been cleaned up in advance of the open house. But more likely, the overall space was designed with a place for rakes, shovels and compost piles. A place that the casual visitor would not notice. I’ll have to nose out the details on my next visit.

The garden, what you can see and what you do not see, reflects the kind of mindfulness that makes Boneyard Studios special. 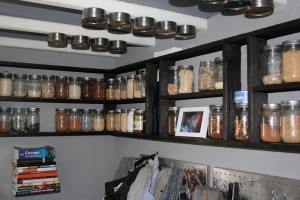 Tiny house dwellers may be partially responsible for the recent boom in the Mason jar industry. Tucked into one corner of The Matchbox is a Mason jar collection of dried foods that would make a grandmother proud. Notice also the storage containers attached to the ceiling.

Tiny house living is not for everyone and, in fact, may not be for anyone.

These homes cannot be used as full time dwellings. Each of the owners must maintain a permanent address elsewhere — and they do — in an apartment or rowhouse.

The tiny house movement faces a number of challenges, in DC and throughout the country, including minimum size restrictions, set-back regulations, restrictions on the number of dwellings per lot and the bureaucracy in place to enforce them. These restrictions were established in the 20th century to address 20th century needs and concerns and have not been updated.

A discussion of the current constraints faced by the tiny house movement placed in historical context can be found in this video which also offers a tour of the inside of The Matchbox. 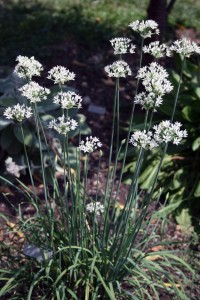 The immediate threat faced by Boneyard Studios is a proposed restriction on “alley camping” that seems to aimed directly at them. This restriction would make these tiny homes illegal.

If you are a DC resident and interested in opposing this potential new restriction, you can find more information here.

Whether the tiny house movement can gain momentum and legitimacy in a developer-controlled urban environment is a question. Regulation of these dwellings is inevitable and necessary. Not all tiny house communities will act with the degree of social responsibility that Boneyard Studios has shown.

The notion that the tiny house movement can provide affordable houses at scale is also questionable. These houses, while affordable for young, single professionals, are not the answer to the affordable housing problem for families nationwide. 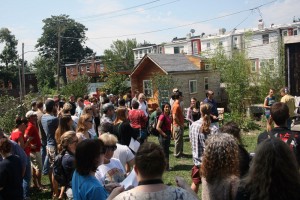 But the solution being offered — urban housing infill with a minimal impact on the environment — cannot be dismissed. All American cities could use an infusion of ambitious and innovative housing design — not just Washington, San Francisco and Portland. If well planned, an influx of thoughtful tiny houses could bring vibrancy to otherwise struggling cities across the country.

The owners of Pera House and The Matchbox plan to push the tiny house envelope further in DC by expanding Boneyard Studios to another lot. They envision using a cooperative or land trust model for the space. You can find more information to help them out here.

If the crowd at Boneyard Studios’ open house is any indication, interest in tiny houses is growing and city zoning departments are going to have to answer the demand with regulation that makes sense for the 21st century.

To follow the development of the tiny house movement throughout the country visit Tiny House Talk or Tiny House Blog.