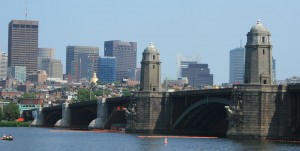 Boston Skyline from the Cambridge side of the river

Cambridge, Massachusetts is Boston’s fraternal twin. Born second in the mind of travelers — the town sits just across the Charles River from its sibling — a little smaller, a little quieter, and a little less expensive. But the same DNA runs through the streets and neighborhoods of both towns. The same drivers cut each other off on roundabouts but screech to a halt when a pedestrian sets foot in a crosswalk. Yankee hating, Bruin loving, and never forgetting 4/20, Cambridge is a sapphire tucked next to Boston’s diamond.

One thing that makes Cambridge such a gem is its beautiful gardens and plantings — public, private and commercial alike.

There are many lush, green areas to visit. Here are three I saw recently. [Click on any photo to enlarge it.] 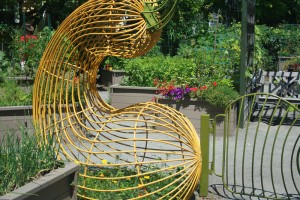 One of 13 active community gardens located throughout Cambridge, the Costa Lopez Taylor Park Community Garden was completed in 2008. It is located on Charles Street in East Cambridge just above Second Street. The land for the park was originally deeded to the City of Cambridge in 2000 by the Beal Companies.

In the world of community gardens, this one is fairly young and its thoughtful design has clearly benefitted from those that came before it. 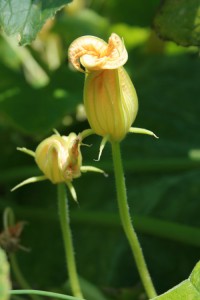 The raised beds of differing heights make this garden accessible for gardeners and visitors alike. Waist-high plots give all sorts of folks the freedom to garden who otherwise would not have it — folks who can’t bend over, folks with bad knees and folks in wheel chairs are a few who come to mind. The raised beds provide the added benefit of protecting the plants by keeping the feet of rapscallion children from inadvertently tromping on them.

On the whole, the layout of the garden and its placement in the larger park make it an inviting experience. The park has a playground, benches, trees over a lawn-like setting and a winding walkway. 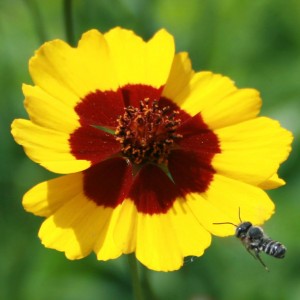 Incoming bee to a flower

Once through the whimsical garden gate, the tender care of the plants by their guardians is evident.

The detail of the individual plots is enchanting. I’m not sure what the waiting list is to get a plot in the garden (I’ve heard the wait could be as long as two years), but based on my recent visit, no one is giving their’s up too soon. 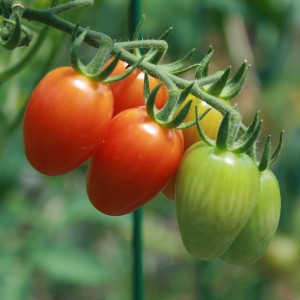 Costa Lopez Taylor Park Community Garden sets the bar high for a modern American community garden. The designers have taken the traditional notion of providing a space for urban-dwellers to have access to some fertile soil and sun to grow their own fruits and vegetables and expanded on it with universal design elements. This garden, tucked into a corner of a neighborhood of tightly packed houses bordered by commercial property, brings together a diverse population in a fun and productive way by providing a connection to the environment just outside the door. 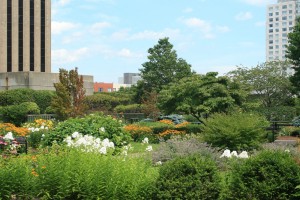 Southwest of the Costa Lopez Taylor Park Community Garden by about a 15-minute walk is a garden on the roof of a garage. I was looking forward to seeing this garden because I have never been to a rooftop garden and had read that it wasn’t particularly easy to find. This led to a discussion with my husband about asking directions or trying to stumble upon it. I’m a stumble-upon-it kinda girl (I know, role reversal) and we found it.

I must admit that I was slightly disappointed by this garden. I had anticipated an eco-friendly rooftop setting filled with native species and a wild, wind-swept look six stories above the streets of Cambridge. Instead, what greeted me when I stepped onto the roof was a highly manicured space with commercial hardscapes and commonplace plant selection — Black-Eyed Susans, phlox and lilies.

There were really no vistas to speak of (with the exception of a narrow view of the street in front of the Marriott featuring a Chipotle restaurant). The entire garden was surrounded by a tall hedge that obstructed views of the city. I can understand the need for a hedge as a wind break, so it was not the lack of a view that caused the garden to fail to inspire. 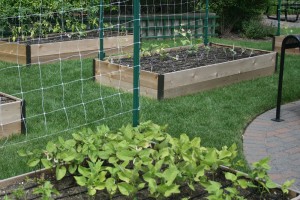 The problem I have with this garden is that the plants aren’t drought tolerant and there are sections of lawn. A lawn with no weeds. It’s not that the garden was commercial looking, it’s that it was suburban looking. It looked liked herbicides, pesticides and sprinkler systems. That was disappointing.

I had higher expectations for a garden just outside the upper floors of the Massachusetts Institute of Technology. I guess I wanted the scientists to be a little more sensitive to the environment. Instead, I felt like they were showing us an example of better living through chemistry.

Nevertheless, there were picnic tables for outdoor lunches. And a brand new raised bed vegetable garden had been installed. So, perhaps the space will evolve. 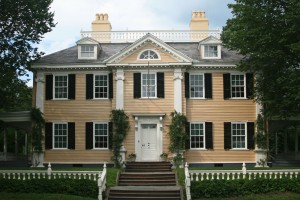 Washington slept here. Actually, Washington lived here — for nine months during the Siege of Boston from July 1775 to March 1776 — with Martha (who was intrepid when it came to being with her husband even during wartime).

This house is located near Harvard at 105 Brattle Street, a street which has become known as Tory Row for all the foreigners who used to live there before George (American George) came and chased them into Boston and eventually out to sea.

We got here by taking the T from Kendall Square.

The Georgian-(of course)-style house was built in 1759 for Major John Vassall Jr., a rich merchant-type (probably tea) and his family who lived there until those pesky colonials suggested the family move across the Charles River into Boston, then across the Atlantic Ocean back to George (British George) himself.

Once the Tories left Boston, so did American George. Which leads to the question of why the house is called the Longfellow House.

Sometime after General George moved on to vanquish the British in other parts of the country, the house was bought by a couple named Craigie who didn’t think it was large enough. They set about expanding it until they were up to their ears in debt. 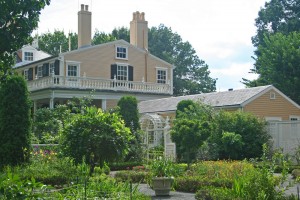 Mr. Craigie died leaving Mrs. Craigie owing the creditors with no way to pay them and a big old house to manage. Ms. Craigie began to take in boarders to make ends meet and one of those boarders was Henry Wadsworth Longfellow, a young Harvard professor in 1837.

In 1843, Longfellow married Fanny Appleton, the daughter of a wealthy textile merchant. Dad gave the house to the couple as a wedding gift. Thus, the Longfellow House. What happened to Mrs. Craigie is unclear.

The home became a hub for Cambridge intellectuals until Longfellow’s death in 1882. The house continued to be occupied by Longfellow descendants until 1950. The first two floors of the house were opened to the public beginning in the 1920’s. The family lived on the third floor. The house became part of the National Park System in 1972. 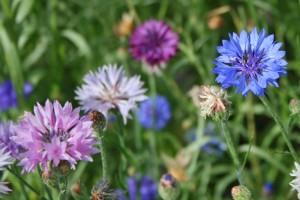 The house is situated on two acres, a scant portion of the original Tory estate, but the grandeur survives. The National Park Service has done a wonderful job with the garden behind the house. It has been kept formal and, to a certain extent, authentic to the period during which Longfellow lived in the home.

Longfellow spoke and read many languages including Italian. He was one of the first to translate Dante’s Divine Comedy into English. In 2004, the house became a setting for Matthew Pearl’s The Dante Club, a murder mystery solved by Longfellow and other Dante scholars of the day.

A day in Cambridge with three secret gardens is complete.