Your raised vegetable garden is beautifully laid out. You’ve tended your seedlings with care. Almost everything managed to get planted this past spring. It’s been a banner year so far, with the perfect rain to sun ratio. But it seems that instead of enjoying the lush view punctuated with a little watering here and a little dead-heading there while waiting for the summer harvest, you’re spending all your time weeding the pathways between your garden beds. Weeding between stones or brick really sucks the joy out of a beautiful day. 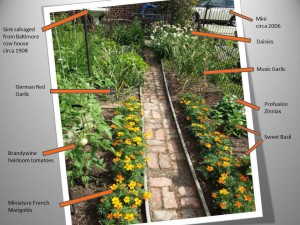 I’ve been breaking nails and busting knuckles for years, no decades, on pathway weeding and I am done with it. No more. Finito. Never again, I say. I believe I have I have found another way to keep my garden paths clear and looking sharp all season long without weeding and without Roundup.

Roundup isn’t an option in my garden. I try to keep everything as organic as possible for many reasons. Mostly because mine is predominantly a vegetable garden and I feed my family with the harvest.

I live in the Chesapeake Bay watershed — the Save The Bay campaign — and the blue crabs and oysters that are in it — all make me want to reduce chemical use. Did you know that Otis Redding was singing about sitting on the dock of the Chesapeake Bay? True story.

I also firmly believe that excessive chemical exposure causes cancer — which may be a phobia, or maybe not. Maryland is a cancer hotspot and they’re destroying Syria’s sarin gas at Aberdeen Proving Ground [located at the top of the Bay] as I write this.

In short, I do not want to add unnecessarily to the chemical clouds that surround my life.

But those damn weeds keep uglying up my garden paths.

Weeds Belong Where They Belong 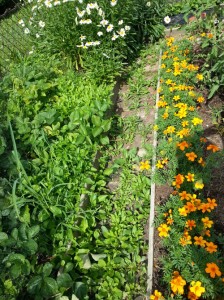 I mean, that picture right there is just uglier than sin, right? You can’t even see the garden for the weeds in the walkway. They look just like the weeds in the strawberry patch. The eye blends those weeds into one big mess. I believe that weeds need to be kept where they belong — elsewhere.

Don’t get me wrong. I’m not a weed Nazi. I am not bothered about dandelions in the lawn. Early season food for the bees, I say. Volunteer violets in with the lavender, that’s ok by me. In the strawberry patch after the berries are finished, fine. But not between the bricks, rooting in the crevices causing salvaged vintage bricks to crack and disintegrate, accelerating by years the need to lay new brickwork.

Spray in the Morning, Party at Night

It’s hard to believe the solution is so easy. Here’s the recipe: 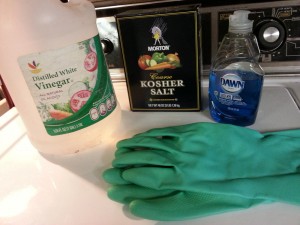 Slosh it around in your spray bottle and give the pathway a dose before you leave for work. By the time you get home for your evening cocktail, your garden walkways will be sporting nothing but weed memories.

I read about this solution probably two years ago. On Pinterest. I never pinned it because, let’s admit it, a picture of a bottle of vinegar doesn’t belong on a garden pinboard. Secret pinboards hadn’t been invented, yet. And vinegar wouldn’t fit on my secret pinboards either. Because, well, they’re secret and I’m not telling you. But I did go out and buy a gallon of vinegar which sat on the basement steps for more than a year before I organized myself enough (got pissed off about the weeds enough) to sacrifice my seed starting sprayer to weed killer.

And here’s what happened: 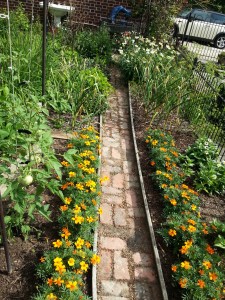 Working while I was at work. It was also 95 degrees outside which probably helped speed up the process.

And to be fair, I did go down the path with a pair of grass trimmers and cut off the tops of the weeds before I sprayed. But still. Amazing, right?

So, now with a glass of wine in my hand, I wander down the pathways of my garden anticipating the bounty to come, not distracted by ugly in the bricks, bending down to pluck out a misplaced purslane, or smacking a mosquito without spilling a drop out of my glass with an eye on what should be in the garden.

Is It Really Organic?

But here’s the question — salt, soap and vinegar — just how organic are they, really? Have I kept the use of harmful chemicals to a minimum? Or have I just infused my garden with safer sounding chemicals with potential side effects for my harvest or the Bay that are just as bad as Roundup’s? Somebody needs to tell me.